Kruunuvuori ghost town with abandoned and collapsed villas, spooky atmosphere and burned down ruins of what once served as seaside summer residencies of the rich is most definitely one of the best kept secrets of Helsinki. Even though I have lived all my life in Helsinki, the capital of Finland, I did not hear about Kruunuvuori ghost town until a few months back and immediately wanted to explore the darker side of Helsinki.

Supposedly the oldest Kruunuvuori villas were built in the late 19th century when most areas outside Helsinki city centre, including the Laajasalo peninsula where Kruunuvuori is located, were nothing but fields, forests and empty spaces. Later the vibrant seaside villa area with panoramic sea views was thriving in full glory 1920–1960.

In 1955 business man Aarne J. Aarnio took ownership of the prosperous villa area and sadly soon after everything started to go wrong.  The new owner wanted to rebuild Kruunuvuori into an urban residential area for thousands of people, but was never granted construction permits. Some rumours say that among many other reasons the grounds were not solid enough for further construction. As a result the land owner lost interest and neglected maintenance of the beautiful villas. Some signs of deterioration of the area were already noticeable in 1970’s and one by one people started to move out. After that Kruunuvuori villas were left as they were and the houses fell in decay.

It feels awful to say but failure with maintenance and renovations together with vandalism and forces of nature have totally killed Kruunuvuori villa area. The beautiful place that once served as glorious seaside playgrounds for the rich elite is today very close to collapse for good. 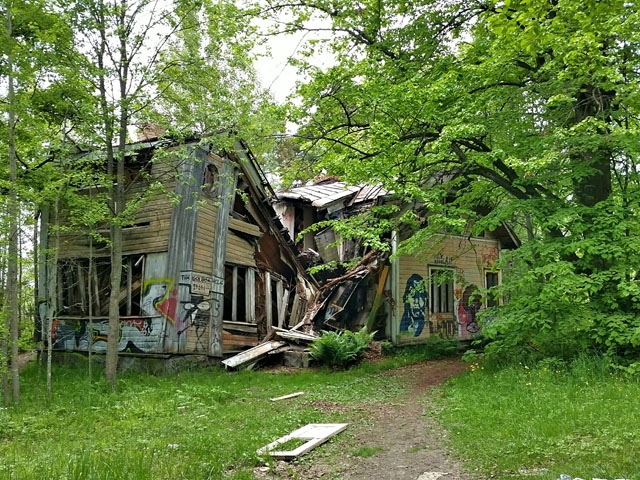 The atmosphere in the area is fairly spooky, creepy and scary since the surroundings are totally abandoned. I did not meet any ghosts, vandalists or crazy people but I did hear lots of peculiar noises coming from the forest and bushes but also from the villas. Are the houses haunted? Or was it just animals playing around, maybe? Would I come here after dark? Never in a million years, way too spooky for me! 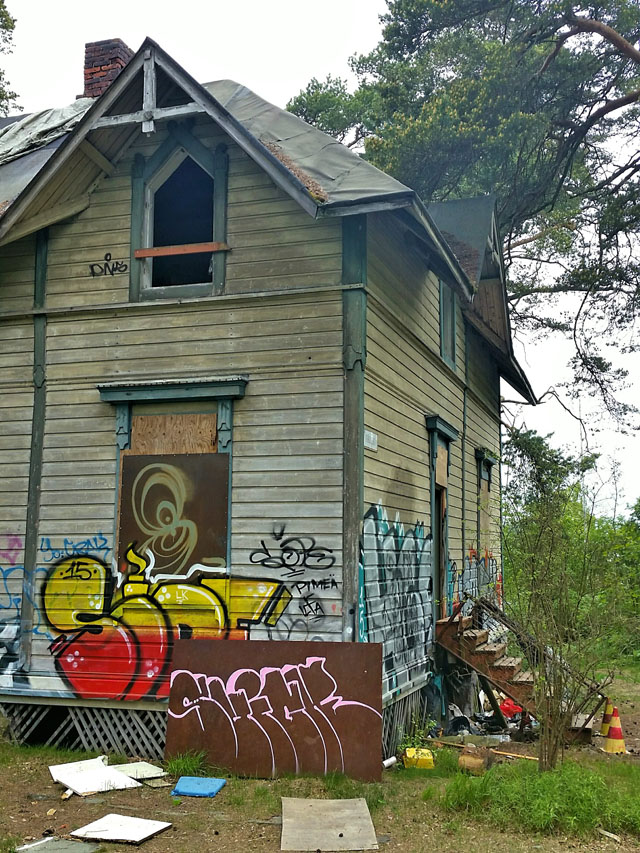 Today there are around 10 abandoned villas left with broken windows and graffiti all over the place. Some of the houses have totally collapsed but a couple of them are still standing up and allow visitors to enter and discover the interiors. 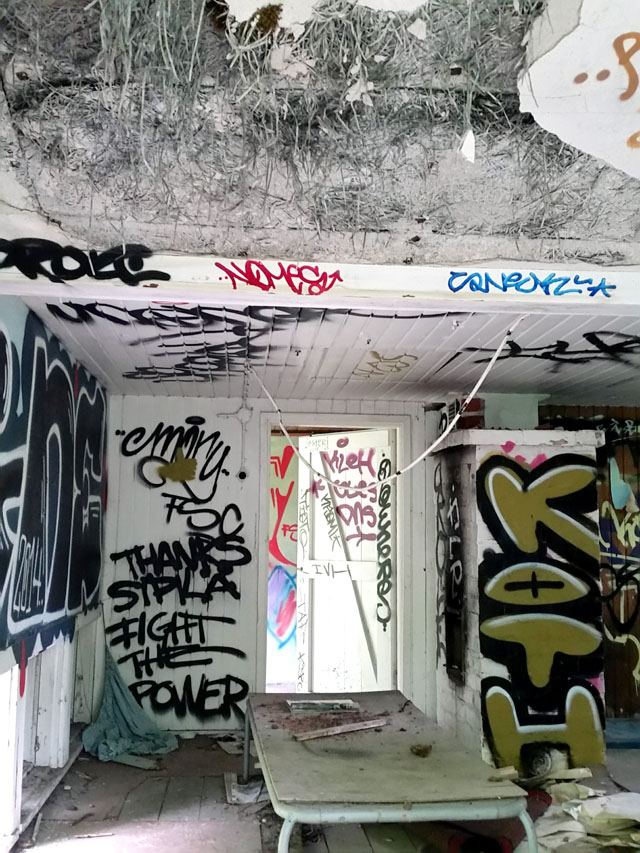 Some villas even still have furniture left in them and in one of the houses the original fireplace and wall paper with pink flowers are still in place. 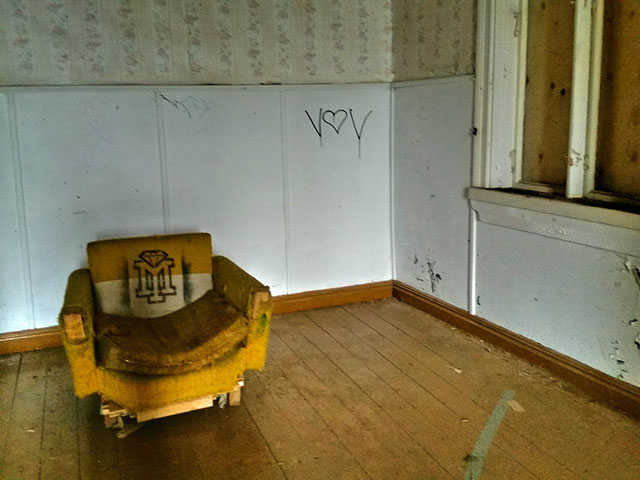 Some of the villas have amazing seaviews and huge lush neglected gardens with grass up to the waist. It was very pretty to see apple trees and colourful wild flowers in full bloom. At that place I was totally able to imagine what kind of a posh and glorious place this had been back in the days when the area was full of life and carefully maintained.

Someone told me that a couple of years ago the City of Helsinki had plans to try to save 3 of the villas. I have no idea if it will happen or not but at least one of those villas was recently burned down completely. What a shame! I also heard that the City of Helsinki has planned to turn Kruunuvuori villa area and the surrounding forests into a nature conservation and recreational area. Moreover, a large new residential area is currently being built just around the corner to accommodate over 10.000 people in the future. No one knows how long the ghost villas will still be here, not too long I reckon, so hurry up, go and explore before it is too late! 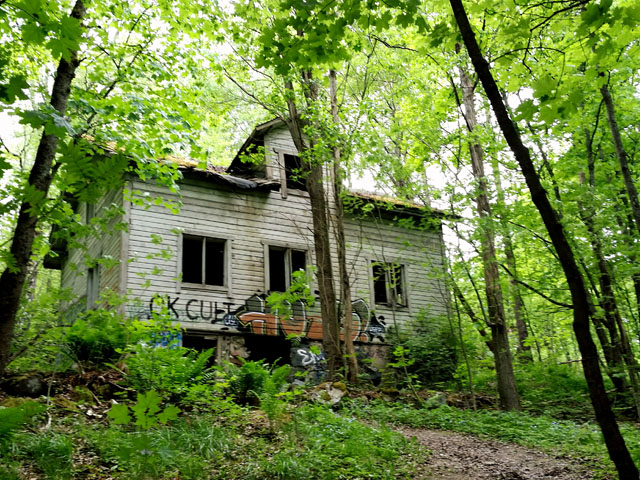 In addition to the abandoned ghost villas, Kruunuvuori villa area is also a great escape off the beaten path with plenty of untouched nature and wild forest. Here you can truly relax away from the crowds and breath in fresh air. On the way to the ghost villas the nature path passes by a swampy area with a pretty little pond. The shoreline provides a great place for a picnic and fantastic seaviews over the neighbouring areas of Kulosaari, Merihaka and Katajanokka. From here you can also see the major landmarks of the city centre. As a whole Kruunuvuori villa area makes a fantastic half-day trip. 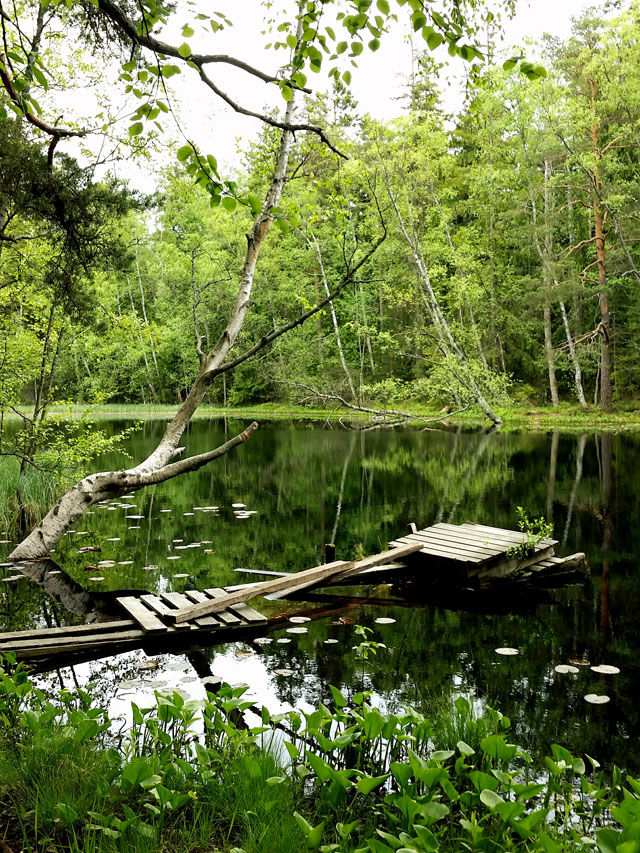 Kruunuvuori ghost town is located only 3 km east of Helsinki city centre, but since it is located on an island with no direct ferry connection, the easiest way to get here is by public transportation (45 min). First by metro to Herttoniemi and from there by bus 88 to Kaitalahti. Hop off the bus at the last stop and walk until the end of the road (Päätie) and turn right onto a smaller sandy road before the construction site. Follow the sandy path into the forest. After 5 minutes your will reach the pond and soon after the first abandoned ghost villas.

Entrance to Kruunuvuori ghost town at the end of road Päätie.

3 Extraordinary Events Not to Miss in Helsinki

Captivating travel stories from around the world, near and far, by an experienced traveller and adventurer.

This site uses Akismet to reduce spam. Learn how your comment data is processed. 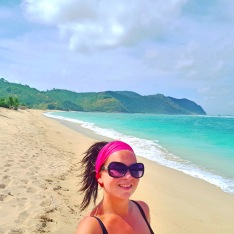 Bustling cities, pristine beaches, beautiful nature, countryside charm. Exciting and unforgettable experiences by a traveller, adventurer and dreamer who loves new cultures, foreign languages, inspiring people, healthy food and exotic drinks. Join me, Piia, as I adventure around the world, near and far.

Been there & Done that 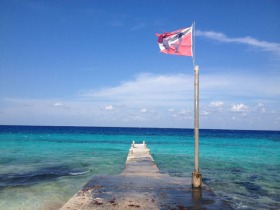 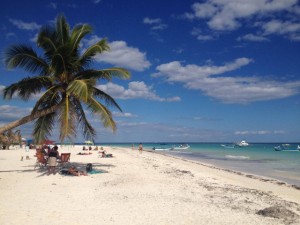 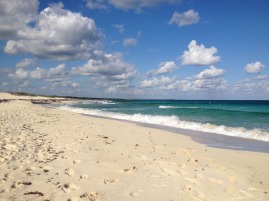 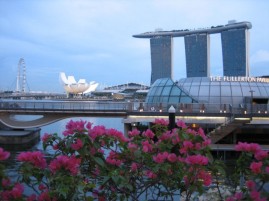 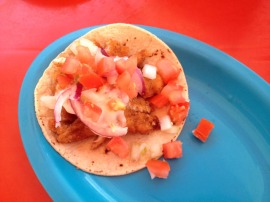 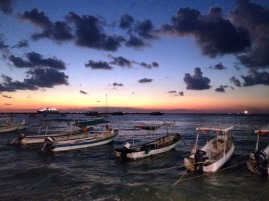 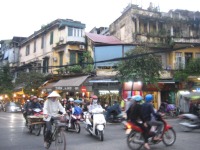 © Piia Veikkolainen and Ticket to Adventures, 2015–2020. Unauthorised use and/or duplication of this material without express and written permission from this blog’s author and owner is strictly prohibited. Excerpts and links may be used, provided that full and clear credit is given to Piia Veikkolainen and Ticket to Adventures with appropriate and specific direction to the original content.